A Swinging' Songbook is an album of original compositions written in the Sinatra/Nat King Cole tradition.

It features co-composer and bassist Geoff Gascoyne and full jazz orchestra and was recorded at Angel Studios. 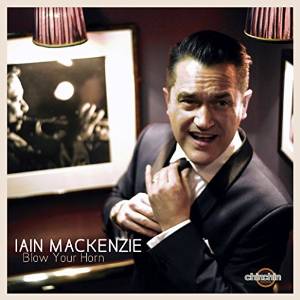 What else has been happening… Well, I am also very pleased to announce that I am the new house singer at The Ritz in London's Piccadilly, for their Live at The Ritz dinner and dances every Friday night. Performing with The London Dance Orchestra, under the direction of pianist/MD Robin Harris, this is a very classy (as you would imagine), and swinging affair! Come on down, it's perfect to dress up for that special celebration.

I'm really enjoying touring with the legendary, and very lovely Tony Blackburn on his Sounds of The 60's Show. We perform 100 classic songs from the swinging decade (medleys of course!) with a great band led by saxophone legend and Radio 2 presenter Leo Green.

I'm still very privileged to regularly sing with Ronnie Scott’s Jazz Orchestra, under the baton of the masterful (and quite funny) Mr Pete Long… we had a bloomin' lovely, but wet time at Chelsea Flower show this year! The Frank & Dean Christmas Party at Boisdale in Canary Wharf was a great success again, and will be happening next December too. Since Jan 2010, I have been on tour eight times with Brendan Cole’s (now ex-Strictly Come Dancing)... last year's shows were delivered to sell out houses across the UK and a second tour of 'Show Man' is already booked for February next year! Book your tickets here!